ADVICE ON THE USE OF GRAINS AS A STOCK FEED SUPPLEMENT

Feeding livestock grain can be a very expensive process and should be undertaken with care.

Within this FAQ section we offer advice on the use of grains as a stock feed supplement as well as some information on the costs/benefits relative to other supplementary feeds.

Cost is an imnportant factor in buying any supplementary feeds however you must weigh up the advantages of each feed types energy values, its dry matter content, amount required for daily stock use, its availability and its suitability for what you want to achieve. Typically grain based feeds come out best overall for cost on a price per unit of feed value basis and also often best value overall for dollars spent.

Traceability and purity of quality in the grain is an important factor and should also be considered.

Pasture quality
To improve the overall efficiency of conversion of pasture to animal products – such as countering low carbohydrate and fibre levels in spring, low protein levels in summer, or to minimise/avoid the effects of pasture issues such as facial eczema spores, high ergovaline pasture etc.

How should I start feeding barley to my cattle?
Cows and cattle that haven’t been fed any other sources of starch (grains, cereal silage) in the past three days need to be gradually adapted to barley. The rumen takes around 10 to 14 days to develop the right types of microbes to fully digest starch. Rates should typically start at no more than 1.0 kg of barley per cow per day and increase by a further 0.5 kg per cow per day every three days to allow plenty of rumen-adaptation time. The actual rate of step-up to your final daily feeding rate does depend on what else is in the diet and pasture quality.

If you stop feeding barley to cattle for more than 72 hours, the rumen loses its ability to digest starch. When you start back onto barley feeding you should re-start the rumen adaptation process again, especially if you intend to feed more than 2 kg of grain per cow per day.

If lactating cows are to be fed grain, grain should be introduced to springers and also fed to colostrums. For example, increase feeding rates from 1 to 1.5 kg of barley for springers, 2 to 2.5 kg for colostrums and the final rate of e.g. 3 to 4 kg per cow per day to the milkers. This allows time to adjust to grain as cows calve.

How much barley should I feed to my cattle?
There are no minimum amounts (but for lactating cattle benefits start to be noticed at more than 2.0 kg per cow per day.) Smaller amounts can be useful to encourage cow flow through the dairy.

The upper limits of feeding does depend on what other feeds are offered. If there is only high quality pasture in the diet, typical safe upper limits of barley may be only 4 kg per cow per day fed as 2 kg twice daily to avoid nutritional imbalances and poor animal performance. If the diet also contains silage, hay and / or cereal straw, more than 4 kg of barley per cow per day is possible. High rates of barley or combinations of starchy feeds sometimes increase risk of rumen acidosis in cattle.

Do I need to process barley for feeding to cattle?
Yes, cattle will lose a high proportion of barley in the dung if it is not cracked. Whole grain is often fed to sheep because sheep chew grain more thoroughly than cattle

Can I feed out barley in open troughs to cattle?
No, potentially dominant cattle may over consume on barley and may get rumen acidosis (grain overload). Barley should ideally be fed through in-shed feeding systems, mixed with silage, or fed out on top of silage over a reasonable distance so that all cattle can access the barley at the same time.

Will feeding barley to my cattle make them protein deficient?
Provided the barley is balanced with a high proportion of pasture and / or good quality lucerne, pasture silage or other high protein supplement, your cattle are unlikely to become protein deficient when fed barley.

What additives should I feed with my barley?
Barley contains low levels of calcium, sodium and magnesium. Limeflour (calcium), salt or sodium bicarbonate (sodium) and magnesium oxide (magnesium) are often needed to balance the diet. Talk to your nutritionist or vet for actual rates suited to your cattle. Don’t add calcium or sodium to grain for springer dairy cows.
Other additives including Rumensin, sodium bicarbonate and magnesium oxide can sometimes help reduce the risk of rumen acidosis when cattle are fed barley.

Can I feed barley to my calves?
Yes, but while barley is a good base for a home-made meal for calves still on milk, however barley alone does not deliver enough protein, fibre, sodium or calcium. Post-weaned calves can sometimes be fed barley to supplement their high quality pasture, but barley should be blended with lime-flour and salt as minimum additives for this purpose.

In Southland barley is used in ruminants feeds as a source of energy. In the spring the lush green pastures are generally high in protein (25-30%) but often lacking in sugar and starch (carbohydrates used for energy).

For optimum performance, the early lactation dairy cow requires approximately 18-20% of protein in the diet. Surplus protein must be excreted in urine with an energy cost to the cow. Carbohydrates supplied by supplementary grain may allow rumen microbes to more efficiently utilize excess protein.

The carbohydrates in barley is primarily starch(58%) with a small amount of sugar. This together with the low fibre contents, accounts for high digestibility

The shell of the seed is not readily broken down by the rumen micro-organisms and because cattle (in contrast to sheep) do not chew whole grains very efficiently, they must ideally be ground or split for more complete digestion by the cattle.

Wilkins Farming has the latest technology in processing to achieve a well-crushed product ensuring optimum utilization of the barley.

Please feel free to email WFL here if there are any queries regarding this data. 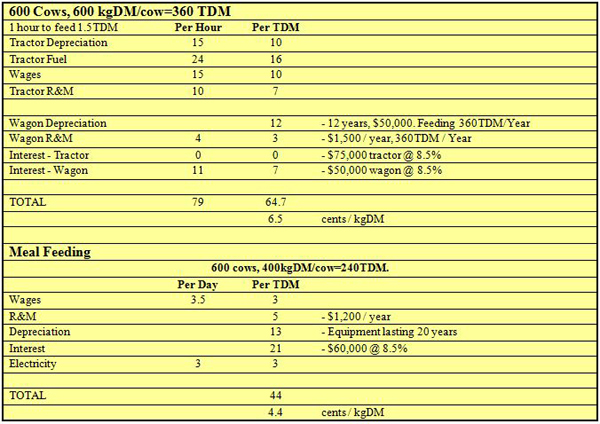 Barley, PKE and Tapioca are all very different feeds and decisions about “Which one for me?” depends on what your cows need. The differences between these feeds, typical second or third round spring pasture, and the ‘ideal’ feed for a cow are shown below.

*These are approximate requirements of a cow in early lactation producing around 2.0 kgMS per cow per dayFeeding a cow well means balancing the diet to provide as close to the ideal cow requirements as you can.

Dry Matter (DM) %: Spring pasture is lush and contains low levels of dry matter. The best supplements are high DM% ones because every bite of supplement delivers more dry matter than sloppy spring pasture that contains lots of water.Crude Protein: Levels are high in most spring pasture. High protein can cause cows to lose too much weight in early lactation due to the energetic requirements by cows to detoxify and excrete excess protein as urinary urea. High dietary protein can reduce the fertility of dairy cows. The ideal spring supplement should contain low levels of protein to dilute down total dietary protein levels and to provide energy to rumen bugs to mop up spare protein for the cow to use. Barley and Tapioca are the best option for this time of year due to the much lower levels of protein in value compared with PKE. Beware of acidosis when feeding these supplements.

Starch: Barley contains lots of starch which is used by the cow to make milk and / or to gain condition heading into mating. Pasture contains very little if any starch. Starch levels are also low in PKE. Tapioca contains very high levels of starch and the starch in tapioca breaks down in the rumen more quickly than the starch in barley. Feeding higher rates of tapioca when compared to barley may increase risk of rumen acidosis in cattle because of this rapid rate of starch breakdown in the rumen compared with barley.

NDF: Low NDF feeds are good because they break down quickly in the rumen and pass into the intestines, leaving more room to fit in more feed = greater appetite. Low levels of NDF in barley mean more energy for making milk or gaining cow condition. This is especially important when feeding high NDF feeds like winter save pasture and high NDF poor quality silages. Barley is very valuable when other parts of the diet contain high NDF. Tapioca contains extremely low levels of NDF which may increase risk of rumen acidosis when tapioca is fed together with very high quality pasture.

Oil/Fat: Fats give the cow’s energy and help her keep condition in early lactation and to gain more condition in late lactation. Barley and Tapioca contain little fat. PKE contains the most fat and can be useful for keeping condition on cows heading into peak lactation.

Barley provides cows with an excellent source of energy because starch is quickly broken down in the rumen to fuel the cow with higher levels of blood glucose. Barley is low NDF, meaning cows can eat more total dry matter every day.
Always compare barley with other feeds on a starch-equivalent and NDF basis, not just based on cents per kg of DM or cents per MJME.

Returns are based on immediate milk responses
Additional effects of grain feeding to early lactation dairy cows are likely to include: 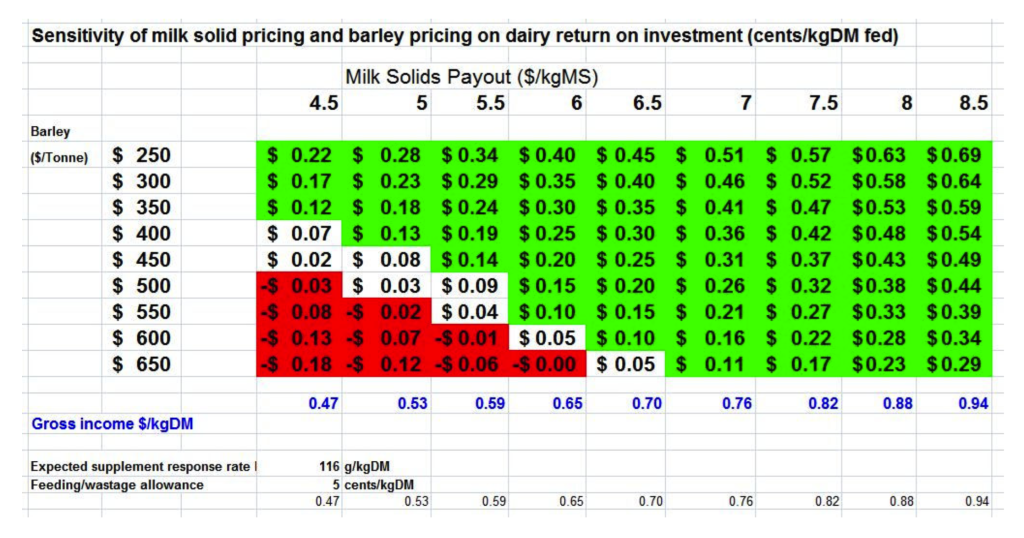 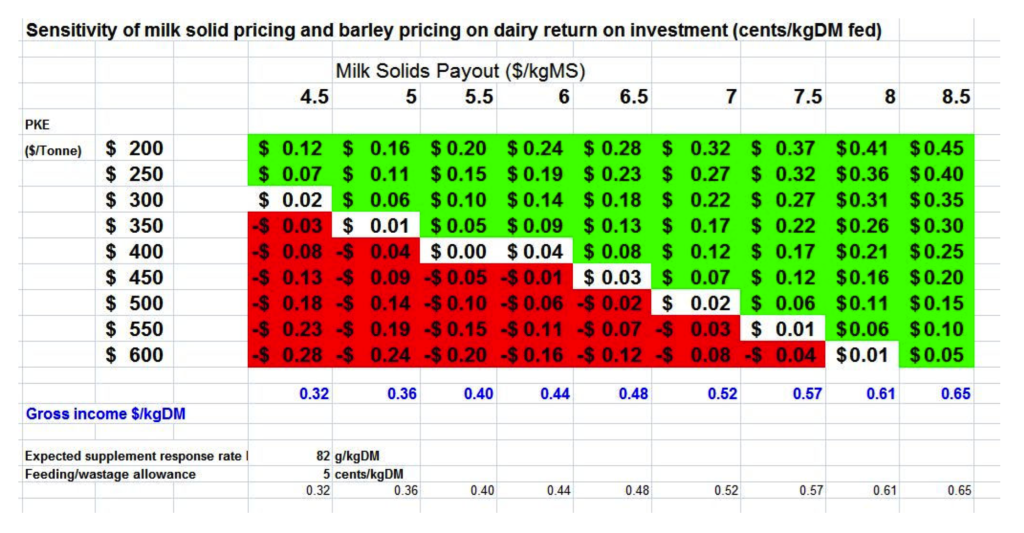